At Henderson, Nebr., John Boehr, 94 years of age and oldest citizen of the town, passed to his final reward last week.

Born in Stockborn, Kaiserslauten, Germany, on October 5, 1845, the fifth son of Mr. and Mrs. Johannes Boehr, he received his elementary education in that community. His mother was of French descent.

In 1872 he migrated to the United States with a group of Mennonites from Russia, arriving at Woodford County, Ill. At this place Mr. Boehr attended school, learning English, and later matriculating at McKendrick College at Lebanon, Illinois.

The year 1877 saw the arrival of another delegation of immigrants from Russia, with whom John joined to locate in the vicinity of Sutton. Before the town of Henderson was thought of, John Boehr bought a 160 acres from a Charley Wooden for $600. This place is two and a half miles south east of the present town of Henderson and is still a family possession.

On July 1, 1879, John Boehr was married to Mrs. Anna Regier Klassen, the couple keeping house in a portion of the old immigrant house which had been divided by this time. To this union were born nine children; Susanna (Mrs. A. A. Regier,) Jacob A., John John [sic] W., Anna, Peter J., Isaac I., Bernhart (deceased) and Marie (deceased.)

The family moved to town in 1915, where in 1918 Mrs. Boehr passed away. In recent years, Mrs. Boehr, Anna and Marie, until the latters death, had made their home together. Since that time Mr. Boehr has resided with Dr. and Mrs. Boehr, at whose home he died at the age of 94 years.

The funeral was held at the Bethesda church, conducted by Rev. A. W. Friesen. 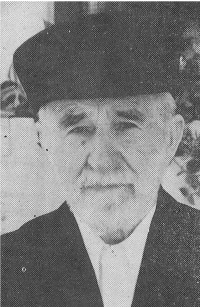 He was the fifth child of a family of six children. He went to school in Germany up to his thirteenth year. During the summer he usually worked as a day-laborer. The wages at that time were rather small and the work was hard.

In the year 1870 war broke out. The stalwart young man was drafted into military service, which was very much against his wishes.

In the winter of 1872 a delegation came from Russia to Germany on their way to America, looking for a suitable place for a Mennonite settlement. Mr. Boehr decided to join them on their journey.

They arrived in Woodford Co., Ill., in May. There he stayed with his uncle, Just Bally, a Mennonite. He worked as a farm hand for four months and during the winter he went to the English school.

About one year later he went to Summerfield, Ill., to a German settlement, where he worked in the harvest field. Thinking that the opportunities were greater in the northern states, he and two others went to St. Paul, Minn., which at that time was still a small place.

To their dismay they found that they were spending much more than they were earning. So they went back to Illinois again. He then attended McKendrick College, Lebanon, Ill., for several months.

In 1877 another delegation came from Russia. In Chicago he met Corn. Epp and Johannes Weber, who had come there to buy lumber. He went along with them westward and finally arrived at Sutton, Nebr., a typical frontier town, at Christmas time in 1877.

For a number of years he worked for Johannes Weber on the farm. He then bought a homestead of 160 acres which was two and one-half miles southeast of the present town of Henderson.

It stood about one and one-half miles north of his place. They cut the building in halves, put them on wagons, and moved them to his place. One part he used for a home. The other half was used for a church for another year.

He also taught school in his own house, one room being especially set aside for that purpose. He also started a night school in which the English language was taught.

This union was blessed with nine children, one dying in infancy. l They are: Susie, Mrs. A. A. Regier, Henderson; Jacob, Langham, Sask.; John, instructor, Stillwater, Okla.; Rev. Peter J. , Richlandtown, Pa. Anna, an invalid, Henderson; Dr. I. I. Boehr and Ben Boehr, both of Henderson; and Marie, who died about a half year ago.

The family moved to Henderson in 1915, where in 1918 Mrs. Boehr passed away. For a number of years he lived with Anna and Marie, until the latter's death, and then he made his home with Dr. and Mrs. I. I. Boehr, at whose place he died.

The funeral service was held on February 15, at 2 p.m., in the Bethesda church. Rev. A. W. Friesen and Rev. J. F. Epp officiaetd [sic] in the church and Rev. H. D. epp at the home. A mixed quartet furnished the music. Interment was at the Bethesda cemetery northeast of Henderson besides his beloved wife. — Sent in by J. J. Friesen.