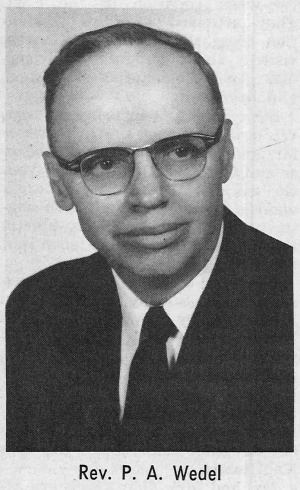 Inman, Kan.—A widely-attended funeral service for Rev. P. A. Wedel was held here Saturday, July 1, in the Bethel Mennonite Church, where he served as pastor for the past seven years.

A native of the Moundridge community, Rev. Wedel was a graduate of Bethel College and held an M. A. degree from Kansas University. He had served in pastorates at the Eden Church, Moundridge; Aberdeen Church, Aberdeen, Idaho; and Alexanderwohl Church, Goessel, Kan.

He served the General Conference as secretary, 1938-45, and was a member of the mission board for 16 years. He was also a member of the Bethel College Board of Directors for some 30 years.

In addition to his widow, Rev. Wedel is survived by three daughters and one son and their families. (A full obituary will be published in a coming issue.)

Philip A. Wedel was born Dec. 25, 1897, the oldest son of Andrew J. and Elizabeth Goering Wedel, at Moundridge, Kan. He attended the public school in District 18, in McPherson County, Kan.

He was baptized May 31, 1941 [sic, probably 1914] and became a member of the Eden Mennonite Church near Moundridge.

After graduation from grade school, he attended Moundridge high school, graduating in 1917. He then attended summer school at McPherson College and taught in Volunteer District during the school term 1917-18. He also taught in Pleasant Ridge district until he was called into service in World War I. Following his discharge from the service he taught in Peaceful District.

On June 17, 1923, he was joined in holy wedlock with Rose Ruth Stucky of Pretty Prairie, Kan.

After graduating from Bethel College in 1923, he taught in Pawnee Rock rural high school from 1923-25 and later took advanced training at Ft. Hays Normal School and Kansas University, from which he received the Masters Degree in 1926.

He was superintendent of schools in Milan, Kans and taught music there from 1926-28. From 1925 he served as part-time minister in the Eden Mennonite Church. For 15 years, 1928-43, he taught Bible and Christian ethics in Moundridge high school and Aberdeen (Idaho) high school.

In 1928 he was called to serve the Lord in a different capacity. He accepted the pastorate of the Eden Mennonite Church near Moundridge—which had called him as pastor already in June, 1925 and which he served intermittently each summer from 1925-28. (During these years he also served intermittently in a Milan, Kan., church.) In May, 1936, he was ordained as elder. Altogether he served the Eden Church 14 years.

He resigned as pastor of the Eden Church in April 1936 and followed the call of the Aberdeen, Idaho, Mennonite Church, beginning the work there on June 14, 1936 and continuing until Oct. 27, 1944.

On Feb. 1, 1960, he became pastor of the Bethel Mennonite Church, Inman, Kan., and served as pastor of this church until his passing—a period of over seven years. The last sermon he preached was on June 18, Father's Day.

During the more than 40 years in the pastoral ministry, Rev. Wedel served in many capacities in the communities where the family lived, and in church and conference. In the Pacific District he was president of the Pacific District Conference for several terms. Other positions which he held included: Secretary of the General Conference; member of the Board of Missions, of which he was chairman from 1953-59; member of the Bethel College board of directors for 30 years; member of the board of directors of Bethel Hospital and Bethesda Hospital.

In 1953 he wrote and edited the Catechism Work Book, "The Way of Life." This was revised twice and reprinted by the General Conference Board of Education and Publication.

He officiated at five church dedications, performed 18 ordinations, baptized 625 individuals, conducted 446 funerals and performed 247 marriages. Until March 1966 he had held evangelistic meetings in 135 churches of the General Conference.

He became ill about a year ago, submitting to major surgery in August 1966. He was able to continue in pastoral work until he entered Kansas University Medical Hospital on June 22. He died there on June 28, 1967.

Funeral services were held at the Bethel Mennonite Church near Inman on July 1, conducted by Rev. Malcolm Wenger and Rev. Paul Isaak.