FROM DIRT FARMER TO MUSEUM CURATOR 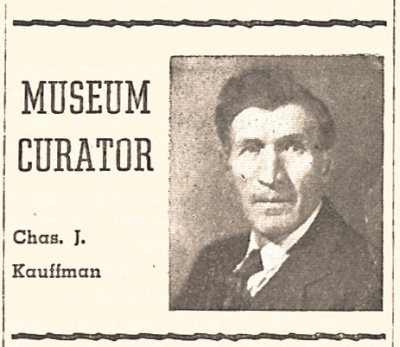 A GENERATION ago the most famous sermon in America was that of Russell Conwell's “Acres of Diamonds.” The theme of the sermon was embodied in the story of the man who sold his farm and travelled all over the world in search of diamonds in the hope of becoming rich. He died a poor man but the man who bought his farm became rich because he found diamonds in his own front yard.

The life story of Charles J. Kauffman of North Newton, Kansas, reminds one of a man who must have heard Conwell's lecture and learned a lesson from it. He decided to look for happiness, beauty, and joy in life right around him; he found it as most people do who are equally wise.

KAUFFMAN was born and spent most of his life on a typical Mennonite farm in South Dakota in the Swiss Settlement between the towns of Freeman and Marion. Early in his life he became interested in the study of nature and wild life.

He tells in a very interesting way how as a little boy he was thrilled with the beauty of the rainbow colors of the wild ducks his father shot, of the well-proportioned and graceful appearance of the ducks as they soared through the sky or floated on the water; and then of the pangs of pain that swept over him as he thought of this beauty being destroyed by plucking the feathers and eating the meat. Then and there he wished that somehow the beauty of God's handiwork could be preserved.

This was the day before the science of taxidermy was advanced and in most places unheard of. Accidentally Kauffman secured a copy of a wild animal book which gave many practical hints along this line. This little book, which long since has been lost, started him on the road to his present position as curator of the Kauffman Museum on the Bethel College at North Newton , Kansas.

ALL HIS life Kauffman had to farm to earn a living but on the side he began collecting every species of wild life found in the home community around Freeman. He mounted or as it was then called, stuffed, these species and put them into one room of the house which had been set aside for that purpose.

The number of exhibits soon grew. From the few dozen common varieties of birds the collection expanded to include several hundred kinds of native birds. In additon [sic] to birds this small farm museum began to have natve [sic] animals such as the fox, the squirrel, the racoon, the muskrat, the skunk, the badger, the various kinds of mice, etc. Later Kauffman began to add foreign species of birds and animals. the collection grew so that even two rooms in the house were too small to display the growing collection. A new house had to be built for the family and the old one was devoted entirely to the displaying of the mounted wild life.

In time even the whole house proved too small to meet the growing demands for space and became inadequate as a museum building. The number of visitors to this unique farmer's home increased with the size of the museum. Gradually it required so mach time to take care of the hobby that less and less time was left for farming.

IN 1941 Kauffman, his family and his museum were moved to its present location. Today even the enlarged quarters of the museum seem none too large. In addition to the 400 species of birds, many of them exceedingly rare, there are hundreds of other valuable displays. not only mounted animals but a multitude of items that depict the life and culture of Mennonites in former days.

There are reed organs, mangle iron, sewing machines, spinning wheels, coin collections, stamp and stone collections, the small model of the Leper colony in Champa, India, a wigwam and life-size models of Sioux Indians, farm implements used by the pioneers, old automobiles and an old log cabin with fixtures and life-size figures of its inhabitants.

The significant thing about Charles Kauffman and his museum is that he built it by first working with what he had at hand. He looked around on his own farm and saw great possibilities. All his life he had struggles but with them also the joys that come from triumph whom one wins in the struggle of a worthwhile cause. The hobby was not a selfish one but one in which God was glorified and fellowmen served.

KAUFFMAN has tried to preserve some of the beauties which God had created and which Mennonite pioneers used and developed. This story does not do justice to the significant work which he has done. It is not intended to do that. The purpose is to emphasize the uniqueness of what one talented but humble Christian farmer has done. He has found beauty where it is, in his own heart and soul; he has expressed it with his own hands as God has given him power; he has enriched the life of those around him and impoverish no one in the process. — J. W. F.

North Newton, Kan. — Charles J. Kauffman, founder and curator of the widely known Kauffman Museum on the Bethel College campus, died at his home here Dec. 29 at the age of 79.

In ill health since he fractured a hip in a fall three years ago, he maintained a keen interest in the museum until his death.

The collection represents a lifetime interest of its founder, who began mounting birds and animals as a farm lad in South Dakota. He was born at Marion, S. D. on May 6, 1882, the son of Russian Mennonite immigrants.

He attended the State Normal School at Mitchell, S. D. and then taught school for 10 years. He also attended taxidermy school in Omaha, Neb., and later began adding items of cultural and historic interest to his collection of birds and animals. In 1908 he was married to Fannie Schrag at Menno, Wash.

Eventually the museum filled one room at the Kauffman farm home near Marion, and later a new house was built and the old one used entirely as a museum. In 1941, at the invitation of Bethel College, the collection was moved to the former Alumni Hall on the college campus.

The collection continued to grow, and a new addition to the hall was opened in 1959. The museum now houses more than 10,000 items, including 500 birds; a variety of animals, and also old farm tools, musical instruments, artifacts from mission fields, pioneer-day costumes, and old cars and bicycles.

A main attraction at the museum is an authentic log cabin of a pioneer Mennonite family, completely furnished and containing wooden figures of the family carved by Mr. Kauffman himself. His lecture given in the cabin has been tape recorded.

Among the thousands who have visited the museum are many school children who remember Mr. Kauffman's unique way of describing his work.

Over the years Mrs. Kauffman has shared her husband's interest, carrying on much of the work at the museum during his illness. College students have also assisted.

Funeral services were conducted Tuesday afternoon at the Bethel College Church, of which he was a member. Rev. S. J. Goering conducted a brief service for the family in the little chapel. Rev. Russell Mast, the pastor, was in charge of the service in the sanctuary. Dr. E. G. Kaufman, president emeritus of Bethel College, read the obituary and gave the funeral sermon.

On a bright spring morning nearly 80 years ago a boy was born who was destined to become a child of nature in a very special way. On an equally bright but chilly wintery morning he returned to the Creator of “all things good and beautiful.” In between was a life characterized by integrity, by industriousness, and by a great eagerness to share with others the richness and variety that he found in the world of nature.

Charles J. Kauffman was born to Jacob P. and Kathrine [sic Katherina] Kauffman on May 6, 1882, on a pioneer farm at Marion, S. D. He grew up there, attended the State Normal School at Mitchell, S. D. and then taught school for ten years, during this time also establishing himself on a fram [sic] near his birthplace. In 1908 he married Fannie Schrag from Menno, Wash. In 1940 he moved to North Newton, Kansas, where he and his wife lived and served for the last 21 years. He died in his home on Dec. 29, 1961, at age of 79.

Early in his life it became apparent that he had a special sensitivity to the artistry of God's universe. He tried to conserve some of this beauty by mounting birds and animals. Together with the gatherings of items of cultural and historic interest, this finally developed into the Kauffman Museum at Bethel College. He was deeply identified with this work, viewing it as both an educational and spiritual endeavor. Birds and animals were to him emissaries of God's love and beauty.

Funeral services were held Jan. 2, 1962, at the Bethel College Mennonite Church, of which he was a member.

Memorial To Founder Of Kauffman Museum

North Newton. — The unveiling of a memorial picture and citation of Charles J. Kauffman, former curator of the Kauffman Museum at Bethel College, was observed last Sunday afternoon.

Participants in a short program were President Vernon Neufeld, John F. Schmidt and Mrs. Charles Kauffman, President Neufeld gave the story of the museum and related how the Kauffmans donated the museum to Bethel College. Mrs. Kauffman expressed her gratitude for the reception the museum has experienced.

There was a fine attendance of faculty staff and board members and their wives. Among the guests was Willis Rich who has always worked hard in promoting the museum. This was the first time he had seen all of the museum in 20 years.

Charles Kauffman passed away in December 1961.