Ngongo David, former presient of the Congo Mennonite Church and one of its last surviving early leaders, died Aug. 18. His age was unknown but was probably in the high 90s. 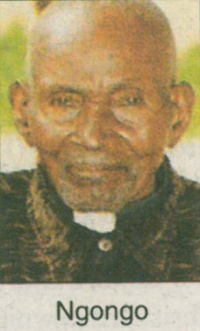 "Pastor Ngongo and those of his generation were truly the founding fathers of today's large and growing Congo Mennonite Church," said Jim Bertsche, former executive secretary of Africa Inter-Mennonite Mission and a missionary in Congo from 1948 to 1974. "We all owe them a debt of profound gratitude."

Mennonite membership in Congo today is 194,000, according to Mennonite World Conference. Congo Mennonite Church is one of three Mennonite conferences in the country.

Ngongo was a colleague of the missionary pioneers, beginning in the 1920s. He and others trekked with the missionaries on foot, encountered villagers' initial resistance and hostility, and witnessed the conversion and baptism of the first handfuls of believers.

His ministry was characterized by the conviction that news about Jesus is good news for Africans. Coming out of traditional African culture, with its fear of evil spirits, he preached that Jesus defeated the evil powers when he die on the cross and rose from the dead.

Ngongo became a Christian after AIMM missionaries, who first came to Congo in 1912, arrived among the Baphende people in 1921. He was among the boys who sat under a tree and watched a teacher trace strange marks on a board suspended from a branch and tell stories about someone names Yesu Kilisto in their language.

When the teacher closed his eyes, bowed his head and began talking with someone they couldn't see, the boys fled, believing that the teacher was speaking with dangerous spirits.

Ngongo enrolled in a Bible school at the mission station. After a Christian marriage, he was pressed into service by missionary staff. His early assignments were as a teacher and evangelist in nearby villages. Later he was ordained to the Christian ministry.

Given oversight of a region of the Nyanga district, he often made trips by bicycle or on foot, holding services in the villages while encouraging believers and instructing baptismal candidates. His quick smile and his love for the Lord made him an effective messenger.

In 1961, ethnic clashes sparked the migration of the Baluba people to their traditional homeland in the South Kasai. The migration took with it Kazadi Matthew, Congo Mennonite Church's first president. Ngongo was elected to replace him and served as president for 10 years.

Ngongo prayed often and at the slightest provocation. When he encountered problems while chairing church meetings, he would brush his papers aside and declare, "It's time to have a talk about all of this with our Father God" and invite all around the table to join him.

A chapter in Twelve Becoming (Faith and Life Press, 1973) tells of Ngongo's courage and faith.

Amid the violence that followed Congo's independence in 1960, village men demanded that Ngongo give them the hunting guns that were left behind when the missionaries evacuated. He refused, saying, "You want to use them to kill people, but the Bible says that is a great sin."

The men threatened to chop his arm off, but Ngongo again refused to give them the guns.

Ngongo prayed all night. He sang over and over, "What a Friend We Have in Jesus." He recalled later, "I knew I was doing the will of God. He gave me peace and courage." The men did not return. His friends said, "Ngongo David has a strong heart."

MWR staff contributed to this report.