Fritz Blanke, the well-known professor of church history at the University of Zurich, Switzerland, was buried on March 8. At the time of his 60th birthday, his bibliography of 290 titles, dealing with a variety of topics, was published.

Blanke being professor in Zurich, the cradle of Anabaptism, devoted a considerable amount of his research to a number of issues and subjects in this field. Best known to American Mennonites is his book which was translated from the German and appeared under the title "Brothers in Christ."

Numerous Mennonite Ph.D. candidates studied under Prof. Blanke and found him a well-qualified expert and a devoted scholar and Christian. One of them is Dr. Paul Peachey, who wrote his doctoral dissertation under him on the topic of the social background of the Swiss Anabaptists. 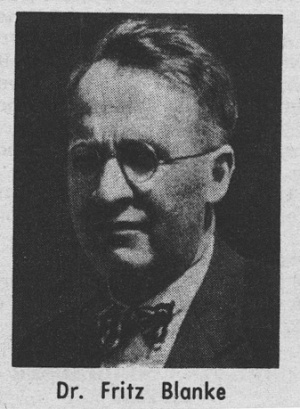 Among those who have received substantial aid from Prof. Blanke in their work on dissertation or in general are Dr. John C. Wenger, Goshen, Ind., Dr. Heinold Fast of Emden, Germany, Dr. John Howard Yoder, Elkhart, Ind., and Dr. Walter Klaassen of Waterloo, Ont. The many students who studied under him and others who would have liked to do so will miss him very much.

Those who attended the Mennonite World Conference in 1952 at Basel, Switzerland, will recall the trip to Zurich and the guided tour through the streets of Zurich under the direction of Prof. Fritz Blanke. He pointed out significant places and events of Anabaptism such as the spot where the first martyr, Felix Manz, was exccuted [sic] and where the first meetings took place.

His lecture in the venerated Grossmuenster cathedral, entitled "The Beginning of Anabaptism in Zurich", which was followed by the memorable congregational singing of "A Mighty Fortress is Our God," was very impressing and unforgettable for those who were there. — C. Krahn.