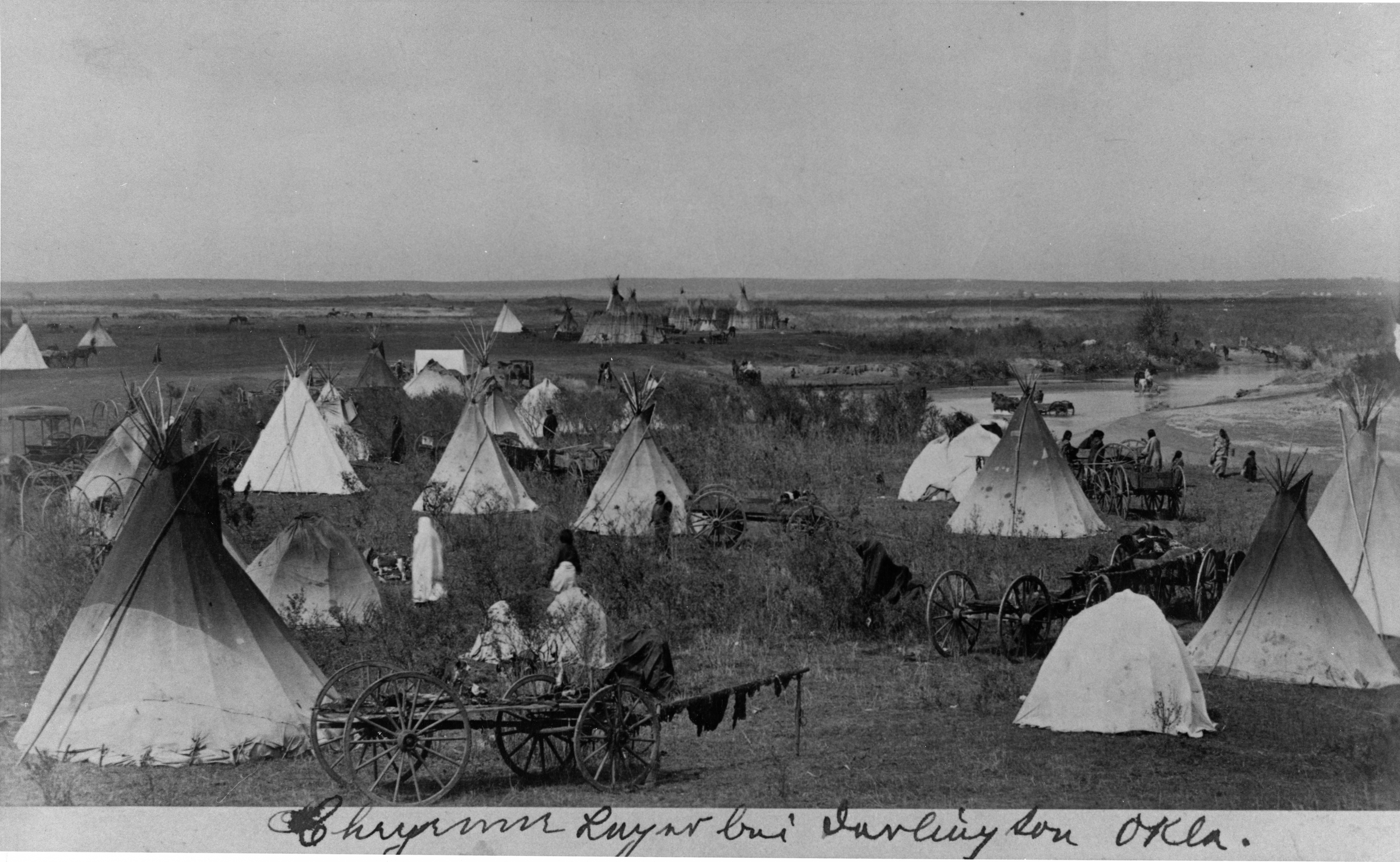 Description: view of a Cheyenne camp, probably at the time of a beef issue; handwritten note by H. R. Voth "Cheyenne Lager bei Darlington Okla." Same scene as in photo 2020-0137.
Date: ca. 1890
Location: Darlington, Oklahoma
Subject: Oklahoma - Native American Activities
Original size: 19 x 12 cm
Source:
Photographer: C. C. Stotz, El Reno, Oklahoma
Note: The original print with H. R. Voth's handwriting at the bottom is lost. Presumably it was not returned at one of the numerous times it was sent out for copying for publication. There are 2 original prints in the H. R. Voth papers (MS.21, box 29, folder "Oklahoma photos (b)"), one of which is rubber-stamped by C. C. Stotz. The other print has some handwritten annotations on the back including "Things hanging on wagon tongue in foreground is meat drying in the sun." There is also an original print in the Anna Hirschler Linscheid photo album (image 17D) which is labeled "After the Issue." Used on the front cover of Mennonite Life, July 1955. Used in Kent Ruth, Great Day in the West: Forts, Posts, and Rendezvoux beyond the Mississippi (Norman, OK: University of Oklahoma Press, 1963), p. 205, with the caption "An Indian encampment near Darlington Agency. The clarity and dramatic composition of this picture makes it one of the classics of Indian photography." Negative sent to Smithsonian Institution June 1987. Used in article by James Juhnke in Fellowship magazine, May/June 1998, p. 9-10. There was a Bethel College press release dated 4 Jan 1967 indicating that the photo had been requested for use in a new textbook (Carl N. Degler, The Age of the Economic Revolution 1876-1900 (Glenview, IL: Scott, Foresman, 1967) but in fact the photo does NOT appear in that book. The photo appears in John E. Sharp, A School on the Prairie: A Centennial History of Hesston College 1909-2009 (Telford, PA: Cascadia, 2009), 31, where it is mis-identified as being along the Arkansas River just south of Wichita; the photo is credited to the Wichita Public Library.