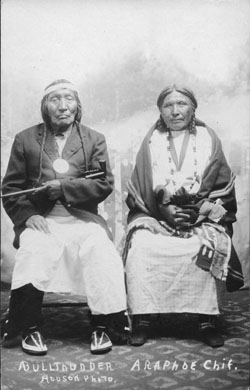 Description: Bullthunder and wife, Arapaho chief; postcard; see 2008-0174 for back; used in Loretta Fowler, Wives and Husbands; Gender and Age in Southern Arapaho History (Norman, OK; University of Oklahoma Press, 2010), p. 282. There it has the caption "Bull Thunder and his wife, ca. 1910. This long-married, respected couple sat for a formal portrait. The photograph was used as a postcard during a time when Oklahoma settlers invited and advertised Native participants to their celebrations to attract visitors and paying customers. Bull Thunder (1838-1917) was a band headman at Cantonment in the 1880s and, along with his wife Striking In Night, became a priest of the lodges, probably achieving the Old Men's Lodge. He holds his pipe and wears the white sheet that indicates his ritual status and the peace medal he received from the government as an intermediary chief. Striking In Night (1851-1917),a co-wife early in her marriage, likely had achieved the Buffalo Women's Lodge, and she and Bull Thunder were a chief couple (chief and chief's wife) at Cantonment in the 1890s. Striking In Night had two sons who lived to maturity. Photo by Hudson. Courtesy of Mennonite Library and Archives, Bethel College."
Date: ca. 1910
Location: Oklahoma
MLA filing: Oklahoma - Indians
MLA filing: Personal - Bull Thunder
Original size: 9 x 14 cm
Source:
Photographer: Hodson