Alexanderwohl Minister Called Away in Death

Funeral services for Rev. Cornelius C. Wedel, 82, pioneer minister of the Alexanderwohl Mennonite church near Goessel and father of President D. C. Wedel of Bethel College, were held at the church Sunday afternoon. Death came at the home in Goessel early Friday, Aug. 6, after some years of failing health.

Members of the church, friends and co-workers of Rev. Wedel filled the church for the services, which were in charge of Rev. Phil. A Wedel, the pastor, assisted by Rev. Arnold Funk of Hillsboro. Burial was made in the church cemetery.

Rev. Wedel was born in Russia Nov. 12, 1871, and came to Marion county, Kansas in 1874 with the Alexanderwohl Mennonite migration. He was a pioneer farmer and minister serving in the Alexanderwohl congregation for more than 50 years.

His service to the church at large included a number of positions in the General Conference and Western District Conference; a long span as a member of the Bethel College board of directors, serving as chairman from 1930 to 1935; and a member of the Herald Publishing Company board of directors for about 25 years, a number of years as chairman. He was also a director of the Bethesda hospital, and was active in the Hilfsplan.

Survivors, in addition to Dr. Wedel, include his wife, the former Katherine Unrau; two daughters, Katie of the home and Susie of Newton; one sister, Mrs. W. B. Unrau of Canton; and two grandchildren.

Cornelius C. Wedel, son of Cornelius and Susanna Voth Wedel, was born in Alexanderwohl, South Russia, on Nov. 12, 1871, and passed away on August 6, 1954, at 2:15 a.m., reaching the age of 82 years, eight months and 24 days. The first few years of his life were spent in Russia until his family migrated to America in 1874. Sharing in the experiences of the early pioneers he grew to manhood amidst the challenges and the limitations of pioneer life.

He attended the elementary school and continued his education through reading. He was baptized upon his confession of faith on May 18, 1891, by Elder Jacob Buller and joined the Alexanderwohl Mennonite church where he retained his membership till his death.

He heard the call to the ministry before the church elected him to leadership. He was ordained as an evangelist on March 29, 1896, and to the office of minister on Feb. 28, 1897, serving as one of the ministers of the Alexanderwohl church as long as his health would permit. The 50th anniversary of his ordination was observed March 31, 1946, with that of Rev. Peter Buller, Rev. P. R. Voth, and Rev. P. H. Richert.

He held various conference offices serving as vice president of the General Conference, 1933-1938, the Emergency Relief Board, 1924-1933, president of the Western District Conference at various times, chairman of the All-Mennonite Convention, 1930-1933. 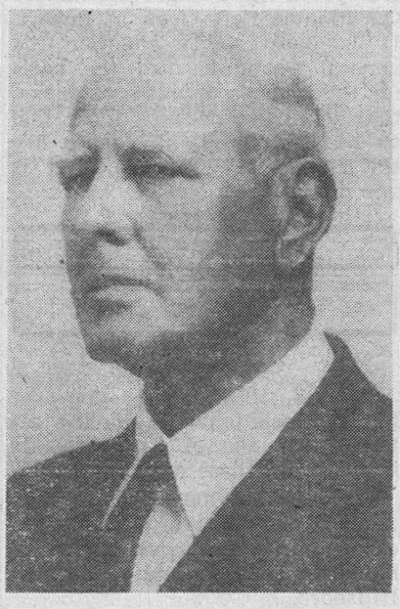 The two institutions to which he gave most thought and energy were the Bethesda hospital at Goessel and Bethel college at Newton, Kansas. He served on the board of directors of the Bethesda hospital for many years. He was elected to the Board of Directors of Bethel college and as chairman of the board from 1930-1935. He was a charter member of the Hilfs Plan, a charity insurance organization, and served as chairman and vice-chairman respectively.

He was married to Katharina Unrau June 23, 1898. This union was blessed with three children, Katie of the home, Susie of Newton, and David of North Newton. Their 50th wedding anniversary was observed June 20, 1948. They were privileged to share the joys and sorrows of life for 57 years. The memory the family treasures most is the stalwart faith with which he met the trials and tests of life. To the family he was a wise father and counselor.

Although he was a farmer all his life, the interests of the church and conference were always primary. Whenever a call for help from any member of the congregation or conference came he would leave his farm work to answer such a call. To many he has served as counselor and as one in whom people could confide.

Even after he was confined to his home his interest in the life of the church never waned. Therefore he appreciated the thoughtfulness and kindness of the congregation when the speaker system was installed which made it possible for him to hear the church services.

His many years of excellent health were interrupted by an accident with a runaway team in 1937 at which time he spent many weeks in the hospital. More recently he became limited more by arthritis. For more than a year he was unable to walk. In February heart dropsy aggravated his condition and the last two weeks he was confined to his bed. Our heavenly Father granted him release from his suffering and limitations, which he had borne patiently on August 6, at 2:15 a.m.

He leaves to mourn his departure his wife, Katharina; two daughters, Katie of the home, and Susie of Newton; one son David of North Newton; one daughter-in-law, Martha; two grandchildren, Eleanor and Judy; one sister, Mrs. W. B. Unrau; four sisters-in-law and three brothers-in-law, and many relatives and friends. His parents, Mr. and Mrs. Cornelius Wedel, one sister Susanna, and two brothers, Henry and Peter C., preceded him in death.

Funeral services were held Sunday, Aug. 8, at 1:45 at the Bergen Funeral home for the family with Rev. A. J. Dyck of Inman in charge, and at 2:30 at the Alexanderwohl church with Rev. P. A. Wedel officiating assisted by Rev. Arnold Funk of Hillsboro. Music was furnished by a men's quartet and the Alexanderwohl men’s chorus. Burial was made in the church cemetery.