• Darryl Lee Voth, 15-year-old son of Mr. and Mrs. J. Randolf Voth of rural Hillsboro, died Friday morning, May 6, at the Bethesda Hospital in Goessel. He had been ill for a number of years with muscular dystrophy, and the family suggests that memorial gifts be made to the Muscular Dystrophy Assn. in addition to the parents, survivors include two brothers, Ranell and DeWayne [Dewayne] of the home, and the grandparents, Mr. and Mrs. R. F. Klassen of Goessel. Funeral services were held Monday afternoon at the Alexanderwohl Church, with Rev. Aaron Epp in charge.

Darryl Lee Voth, Rt. 2, Hillsboro, Kan., son of J. Randolf and Phyllis Klassen Voth was born March 10, 1951 at Goessel, Kan. At the age of 18 months it was learned that he was an apparent victim of muscular dystrophy. However, he grew and developed and was able to attend the Gordon Elementary Achool, Goessel, for three years, after which he participated in the 'Home-bound' school program. At the age of 10 he was confined to be on the wheel chair most of the time. 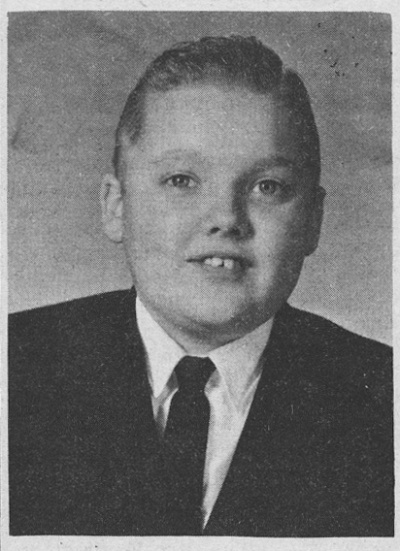 Darryl, being the first child to come into their home, was a great joy to his parents in spite of his handicap. He was willing to do his studies and work which were assigned to him and enjoyed the time spent with his teachers. One of his greatest disappointments was that of not being able to attend Sunday school and church. He appreciated everything that was done for him.

Although he could not always attend, with the help of his parents he conscientiously filled out the work book. He had a child-like faith in everything that everything would be all right, trusting in Jesus for His love and care. he had a great concern and interest for his many friends.

He became ill rather suddenly with acute pneumonia on May 5 and was taken to the Bethesda Hospital, Goessel, where he passed away to be with the Lord the morning of May 6, 1966, having reached the age of 15.

Those remaining to cherish the memory of his life are his parents; two brothers, Ranell and DeWayne, both at home; the grandparents, Mr. and Mrs. R. F Klassen, Goessel, Kan.; uncles and aunts and many relatives.