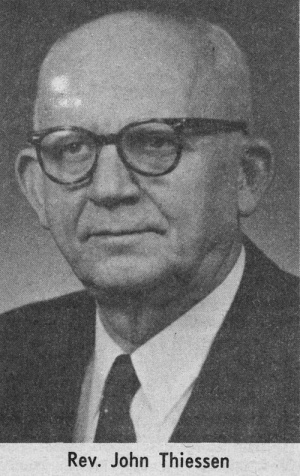 Rev. Thiessen, a resident of the Memorial Home at Moundridge, became ill Wednesday forenoon while in the Newton business district, and was taken to the hospital by ambulance. Death was caused by a stroke of paralysis.

The funeral, attended by about 600 persons, was conducted Sunday afternoon at the Bethel Mennonite Church near Inman, of which he was a member. The service was in charge of Rev. P. A. Wedel, the pastor. Rev. Orlando A. Waltner, executive secretary of the General Conference, preached the funeral sermon.

A native of the Moundridge community, Rev. Thiessen was a graduate of Bethel Academy and Bethel College. Later he received the Master's degree from Witmarsum Seminary at Bluffton, Ohio and the B. D. degree from McCormick Theological Seminary, Chicago.

Following his marriage to Elizabeth Wiens of Inman in 1921, they left for the India mission field, where they served until 1949. While in India Rev. Thiessen was active in educational work, having a leading part in establishment of the Janzen Mennonite Higher Secondary School at Jagdeeshpur.

After his return to the homeland, Rev. Thiessen became executive secretary of the mission board, serving in that capacity for 10 years. Since 1960 he had been interim pastor of four churches—Bethesda at Henderson, Neb., Faith Mennonite in Newton, Alexanderwohl at Goessel, and Bruderthal near Hillsboro—and served for a time as chaplain of Bethel Deaconess Hospital and Home. He also assisted in a visitation ministry at the Eden Church near Moundridge and the Inman Mennonite Church.

John Thiessen was born May 25, 1893, near Moundridge, Kan., the youngest of Jacob and Sara Thiessen's 12 children, all of whom preceded him in death. He died Feb. 16 at Bethel Deaconess Hospital after suffering a stroke in downtown Newton the morning of Feb. 15, 1967.

He received his education at a parochial school near Inman, at Bethel Academy, Bethel College, McCormick Seminary in Chicago, and Witmarsum Seminary in Bluffton, Ohio.

While in Chicago he met and married Elizabeth Wiens, who preceded him in death six months ago. Their life together was dedicated to God in missionary work, beginning with their ordination in 1921 in the Bethel Mennonite Church, Inman. Here they maintained their membership to the end.

The worked as missionaries in Mauhadih and Jagdeeshpur, India for 24 years. Dad made a significant contribution to the education of young people. Jansen Memorial School in Jagdeeshpur stands as fruit of his vision and dedicated labor and leadership.

Upon returning from India our parents made their home in North Newton. His experience as a missionary qualified him in a special way for his appointment as executive secretary of the Board of Missions, in which capacity he served from 1951 until 1960. This period was characterized by his prayerful and fatherly concern for missionaries. In these years our mission board expanded its work to include Japan and Taiwan.

After retiring as executive secretary he served as interim pastor of four churches: Bethesda at Henderson, Neb., where he also served in 1950 and 1951; Faith at Newton, Alexanderwohl of Goessel, and Bruderthal of Hillsboro. He also assisted in a visitation ministry at the Eden Church of Moundridge and the Inman Mennonite Church. His personal warmth made him a beloved friend and pastor as well as a preacher. In 1964 he accepted the appointment as chaplain at Bethel Deaconess Hospital and Home for Aged in Newton. He entered the Memorial Home for the Aged in Moundridge in 1962.

In 1963, Bethel College conferred on him the distinguished alumnus award in recognition of "notable contribution to mankind and loyal service to alma mater."

His immediate family and close relatives are his brother-in-law A. W. Wiens, and his children, Rev. Harold of Summerfield, Ill., Dr. Arthur of Champa, India, Eleanor, Mrs. Marvin Ewert of Newton, Muriel, Mrs. Ted Stackley of Stull, Kan., and Dorothy, Mrs. Demetrios Xouris of Wichita, Kan., with their companions, and 16 grandchildren.