NORTH NEWTON, Kan. — Maynard Shelly, who confronted contentious issues with firm conviction as editor of The Mennonite during the 1960s, died Aug. 7. He was 84. 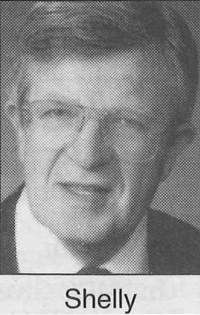 By addressing the controversies of that turbulent era, Shelly changed the way church members perceived the publication, said Robert Regier of North newton, who did layout and artwork for The Mennonite from 1959 to 1963.

"Maynard was very interested in social issues and worked very hard at trying to fuse faith and action," said Regier, a longtime art professor at Bethel College. "He saw this as a very important dimension of his understanding of the Anabaptist faith."

Two key issues for Shelly while editor were the Vietnam War and racial injustice, Regier said.

"He tried to engage those two issues and bring them before the leadership in a variety of ways," Regier said. "Maynard's vision took the magazine in a direction that created a little more conflict than had been experienced."

The Mennonite's content had been more devotional for a readership with a broad range of theological perspectives, he said.

"Maynard moved it a little bit more into a prophetic role," Regier said. "His editorials became more of a commentary on social-political types of issues, rather than a more personal piety."

Vern Preheim of Newton, GC Peace and Social Concerns secretary from 1962 to 1965, recalls Shelly's courage in the midst of conflict.

"He did a good job, but caught a lot of fire for his strong anti-Vietnam War stance," said Preheim, who later served as the denomination's general secretary. "He was very courageous and followed his convictions."

After leaving The Mennonite in 1971, Shelly and his wife, Griselda Gehman Shelly — to whom he had been married since Sept. 7, 1945 — served with Mennonite Central Committee in Bangladesh. Staying until 1974, they worked on a development program with refugees affected by a 1970 cyclone and war between East and West Pakistan.

After that, Shelly wrote scripts for MCC films, Sunday school curricula and freelance magazine articles. He authored New Call to Peacemaking in 1979 and a four-volume Bible survey course called Discovery in 1984.

Also in that year he became general editor for the GC Commission on Education, working on projects such as book publication through Faith and Life Press, the church bulletin service and the Foundation Series for youth.

Preheim, who was GC general secretary at that time, was pleased with Shelly's work. "He was very thorough," Preheim said. Shelly retired in 1990, but continued to write Sunday school curricula.

He was born Feb. 3, 1925, on a farm in Milford Township, Pa., to Howard and Emma (Myers) Shelly. He was baptized at West Swamp Mennonite Church in Quakertown, Pa., when he was 15. After graduating from East Greenville (Pa.) High School, he earned a degree from Bluffton (Ohio) College in 1945.

Shelly served as assistant executive secretary of the GC Mennonite Board of Education and Publication from 1955 to 1961. That role included serving as associate editor of The Mennonite.

In addition to his wife, survivors include a son, Javan Shelly and his wife, Sue, of Cincinnati; four step-grandchildren; and siblings Howard Shelly of Bluffton, Ohio; Alton Shelly of Goshen, Ind.; Sterling Shelly of North Newton; and Marjorie Nester of Normal, Ill.

He was preceded in death by brothers Raymond, Irwin, Kenneth, Ralph, Walter and Karlton.

He was a member of Bethel College Mennonite Church, where his memorial service was held Aug. 11.