• Friends and associates extend sympathy to Mr. and Mrs. Virgil J. Nachtigal of 522 West Fifth St. in the sudden passing of their daughter and eldest child, Randlyln Jonenee, 14, who died unexpectedly Thursday after only a few hours of illness. Both parents are employed in the printing plant of the Herald Book and Printing Co. Randyln became ill Thursday forenoon while attending classes at the Santa Fe Junior High, where she was in the 9th grade. She was taken to Bethel Deaconess Hospital at noon, and died in the early afternoon. Death was attributed to a congenital vein condition resulting in a cerebral hemorrhage. The largely attended funeral was held Saturday forenoon at the First Mennonite Church, with Rev. Arnold Epp officiating. Members of her Sunday school class attended the service in a body. Surviving in addition to the parents are a sister, Becky, and two brothers, Kelly and Lonny, all of the home; and the grandparents, Mr. and Mrs. Peter F. Nachtigal of Newton and Mr. and Mrs. John Woelk of Goessel.

Randyln will always be remembered for her appreciation for the finer things of life. She found great delight in the activities of the church. For many years she had been a choir member. In the last seven years she had only two absences from Sunday school. She was becoming quite proficient in playing the piano. One of her first loves was found in her 4-H activities. Here she found opportunity to give expression to her innate artistic abilities. 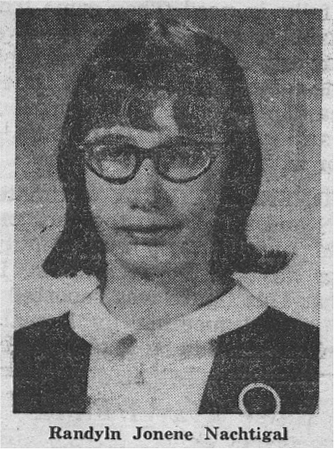 Early in her life she was dedicated to the Lord whom she now trusted for salvation. At the time of her death she was a member of the pastor's Catechism class, preparing for baptism and church membership.

The funeral service was held Saturday 10:30 A.M., Dec. 11 at the First Mennonite Church of Newton with Rev. Arnold Epp officiating. A ladies sextet sang, "Wonderful Peace" and "Saved by Grace." Members of her Sunday school class attended the service as a group. Interment was in Greenwood Cemetery. — The Family.