This was the extent of the information concerning their deaths which reached Mennonite Central Committee headquarters Saturday noon, July 24. MCC personnel were deeply moved upon receiving this information and extend deepest sympathy to the families and friends of these men.

Eli M. Miller was the son of Mose D. Miller, Route 1, Fairbanks, Iowa, and a member of the Maysville Conservative Amish Mennonite church, Mt. Eaton, Ohio. He sailed for Europe on April 2, 1953, and served at Backnang, Germany, before transferring to the project in the village of Panayitsa, Greece.

Simon D. Miller was the son of Dennis J. Miller, Route 1, Kalona, Iowa, and a member of the Middle West Sharon Old Order Amish group. He left for Europe on Oct 8, 1952, and like young Miller worked at Backnang before transferring to Panayitsa.

These men were working with other PAX personnel in Panayitsa in various agricultural experimentation, food preservation, and nursing projects in behalf of poor Greek villagers. They had been selected for service in Greece because of their dependable work in the PAX program in Germany. These youths are the first PAX men to be taken by death. They are the third and fourth I-W men to be called by death, and interestingly enough, all four I-W’s have lost their lives by drowning.

BODIES OF DROWNING VICTIMS RETURNED TO U.S. FOR BURIAL

Basel, Switzerland — Memorial Services were held recently at the Germany PAX units of Wedel, Enkenbach and Backnang for Simon Miller and Eli Miller, PAX men who drowned July 23 near their agricultural improvement unit at Panayitsa, Greece.

According to Elbert Esau, leader of the Greek PAX units, the two young men and another Mennonite, Devon Schrock, went swimming in a lake with a Greek policeman who had been a constant friend of the men serving at Panayitsa. After about 30 minutes in the water it became too deep for them and the policeman—the only one of the four who could swim—was not able to rescue the two Miller boys. 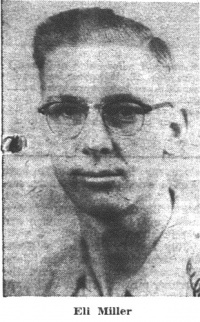 Both had previously served for approximately one lear [sic] at Backnang, Germany. Simon had worked in Greece since March 1, 1953 and Eli since March 15, 1954. PAX pastor John Shenk and Director Dwight Wiebe conducted the memorial services at the three units, stressing the need for more “men who are willing to sacrifice all for the cause of Christ.” 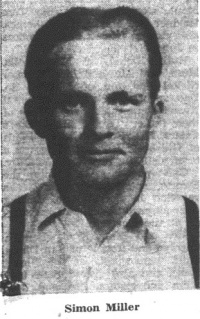 Services for Eli, son of Mose D. Miller of Fairbanks, Iowa, were held at the Maysville Conservative A. M. church, Mt. Eaton. Simon, son of Dennis J. Miller, was a member of the Middle West Sharon church near Kalona, Iowa, and services were held at the residence and also in a neighbor’s barn. Both funerals were widely attended, an estimated 1,000 persons attending the Iowa services.

The services at Kalona were in charge of Bishops William Yoder and Ira Nissley. Also participating were Lester B. Miller, Amish minister; Bishop Elmer Swartzendruber, representing the Conservative church; and Henry A. Fast of North Newton, Kansas., vice-chairman of the MCC. C. N. Hostetter, Jr., chairman, represented the MCC at the services in Ohio.

A Greek PAX man wrote that the Panayitsa villagers “were struck pretty hard” by this incident. Another report stated that these men were highly respected by the Greek people with whom they worked. A co-worker wrote that “they both knew the Lord well and were serious in their Christian lives.”