BLUFFTON, Ohio — William E. Keeney, a retired professor at Bluffton University and Bethel College in North Newton, Kan., known for his devotion to peacemaking, died Nov. 12. He was 84.

His early life was "a great up-by-the-bootstraps story," according to Mennonite historian and former Bluffton president Robert Kreider of North Newton.

Raised in a Pennsylvania coal mining family, Keeney came to the Mennonite church after a faith journey that included enrolling at Bluffton in 1941 and becoming interested in peace issues during World War II. In 1942, Keeney applied for conscientious objector status and later entered Civilian Public Service.

Keeney graduated from Bluffton with a bachelor's degree in 1948. He graduated from Mennonite and Bethany Biblical Seminaries in 1953 and from Hartford Theological Seminary, where he earned a doctorate in 1959. He also attended summer school at Bethel in 1947 and at Garrett Biblical Institute in 1951. 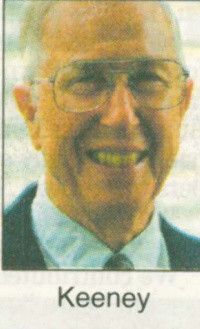 In 1968, he became academic dean at Bethel, serving until 1972, when he became provost, serving until 1974. From 1975 to 1979, he was director of experiential learning and continuing education at Bethel and director of continuing education, contract degrees and peace internships from 1979 to 1981. After leaving Bethel, he taught at Kent State University until his retirement in 1990.

He wrote or edited seven books and numerous articles on peacemaking and religion, including The Development of Dutch Anabaptist Thought and Practice from 1539-1564, published in 1968, and The Writings of Dirk Philips, edited with C. J. Dyck and Alvin J. Beachy and published in 1992. He translated Dirk Philips: Friend and Colleague of Menno Simons, 1504-1568 by Jacobus Ten Doornkaat Koolman.

A memorial service was held Nov. 18 at First Mennonite Church.