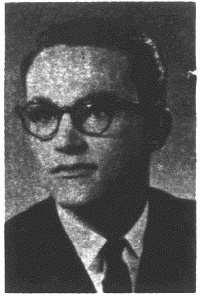 Harrisonburg, Va. — Floyd Gingerich, a sophomore at Eastern Mennonite College, was fatally injured Jan. 2 in a freight train-automobile accident when he was returning to college from spending Christmas vacation at his home near Arthur, Ill. the accident occurrred [sic] only a few miles from his home at 3:30 in the morning.

Other persons in the car were Jonas Borntrager, Rodger Gingerich (Floyd's brother), and Anna Miller, all students at Eastern Mennonite College and from the same community. Another passenger, Dorothy Miller, was returning to Rosedale Bible School, Rosedale, Ohio.

The survivors are recovering satisfactorily from injuries. However, Jonas Borntrager and Anna Miller were on the critical list for a few days.

A memorial service for Floyd was held in the regular chapel service at EMC on Jan. 4. Eulogies were offered by persons representing the congregation at Mt. Jackson, Va. in which he served and worshiped, as well as the dormitory, the sophomore class, and the faculty and administration of the college. Meditations were given by Pastor of Students Truman H. Brunk and President Myron S. Augsburger. The service concluded with a congregational hymn, "Lift your Glad Voices."

Funeral services were held at the Arthur Mennonite Church, Arthur, Ill. at 2:00 p.m. on Jan. 4.