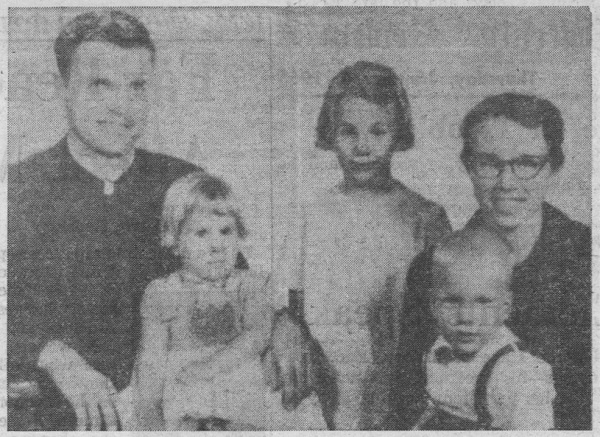 Salunga, Pa. — Two small children of David R. and Erma Clemens, missionaries to Tanzania, East Africa, died Dec. 21 of poisoning caused by eating a quantity of malarial tablets, it has been learned by the headquarters of the Eastern Mennonite Board of Missions here.

First reports indicated that the children, four-year-old Valerie, and three-year-old David Randall, apparently found the sugar-coated tablets and ate several of them.

A report from Dr. J. Lester Eshleman of Shirati Hospital, stated: "More information assembled later indicated that the children likely took more than three or four tablets. . . . It is therefore increasingly clear that death was caused by the poisoning of the malarial drug."

The children were rushed from the Mara Hills missionary children's school, where the Clemenses serve as houseparents, to the nearby Nyabasi dispensary, where nurses Mary Harnish and Elva Landis attempted to administer stimulants and stomach washings. Both children died within two hours after eating the pills. The bodies were taken to the Shirati Hospital, about 50 miles away, for post-mortem examination.

The Clemens family arrived in Tanzania for their first term of service in September 1964. In addition to the parents the children are survived by a sister, Marilyn, 8, and the grandparents, Mr. and Mrs. Elam Smoker of Paradise, Pa. and Mr. and Mrs. Earl Clemens, Harleysville, Pa.

The entire missionary staff from North and South Mara Districts was able to attend the impressive funeral service, conducted in the Shirati church by Bishop Donald Jacobs. A viewing was held in the Eshleman home, with viewing in a small adjacent cemetery.