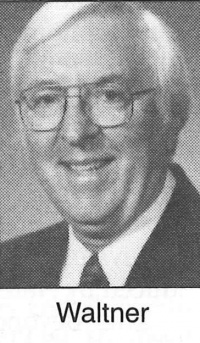 Waltner was active in church work for more than five decades, including serving as president of the Pacific District and Central District of the former General Conference Mennonite Church, the General Board of the General cConference, chair of the Mennonite Biblical Seminary Board and moderator of Indiana-Michigan Mennonite Conference. He served for 12 years on the board of Oaklawn, a Mennonite-affiliate mental health care facility in Goshen.

At the time of his death, Waltner was overseer for five congregations in Indiana-Michigan Conference.

Waltner authored This We Believe, a catechism study book for young people, in 1967. Another significant experience early in his ministry was a summer doing archaeological work in Israel.

His deep interest in biblical studies and the Hebrew language led to his research and writing of Psalms, a volume in the Believers Church Bible Commentary series, published in 2006.

"Throughout the writing, my stance has been that of a pastor," he wrote in the preface to Psalms. "Consequently, I have given attention to the possibilities of preaching from the psalms and using them in prayer, hymnody and the worship of the congregation."

Waltner was born Sept. 7, 1931, in rural Marion, S.D., the son of Henry Jac and Ida Kaufman Waltner. He graduated from Freeman (S.D.) Academy and Junior College. After farming with his father and a brother, Calvin, for three years, he attended Bethel College in North newton, Kan., where he met Lenore Pankratz of Mountain Lake, Minn. They were married June 1, 1956.