Remembering the life of a strong, compassionate leader 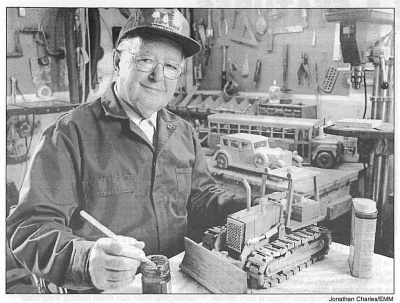 “No one understands me. It’s totally unfair!” Hot tears sprang to my adolescent eyes as I read my report card for the fall semester at Lancaster (Pa.) Mennonite School in 1964. I’d received a failing grade in conduct.

Humiliated, I slouched into a desk at the edge of the study hall. Then I heard my name called. I was being summoned for my annual interview with Bible teacher David Thomas.

Unable to compose myself, I sat in his office sobbing into the corner of my jacket.

Instantly I knew I could trust him, even though he was part of “the enemy” – the black-suited bishops of the “Supervisory Committee” that imposed strict, fun-limiting regulations on our socials, dramas and dress.

He listened while I poured out my grievances. Then he changed the subject, and we were talking excitedly about revivals around the church. He was coming to my church, Mellinger Mennonite, for renewal meetings. What were the needs? Could I help to organize a prayer meeting? Had I heard of students at Eastern Mennonite College who were speaking in tongues?

Hope and faith restored, I skipped back to study hall. There was hope for me, a frustrated, disoriented daughter of Mennonite missionaries to Ethiopia, who was trying to fit into Lancaster County.

After those turbulent high school days, I didn’t see David very much. But he came to symbolize all that I most appreciate about the Mennonite Church – stories and humor rooted in faith and community, a passion for missions and service, and a simple, faithful biblicism that doesn’t need a seminary degree. “The Bible says . . .” was his trademark phrase.

He extended caring and compassion to all, but especially to those on the edges. He saw pharisaical narrowness in both liberal and conservative camps, and held the grace and truth of Jesus in creative tension.

David loved the church, and he loved missions. And as a member of the bishop board and later as moderator for Lancaster Conference (MC), he worked closely with the mission board until he retired as moderator in 1982.

David never visited Ethiopia during the years I lived there as a child (1949-1962), but he took his first overseas missions trip in 1963, visiting Mennonite leaders and churches in Luxembourg, Germany and France.

David also served on the Council on Faith, Life, and Strategy of the Mennonite Church, where my husband, Richard, had the privilege of working with him.

David’s son Mel, now pastor of Ambler (Pa.) Mennonite Church, observed that his father would effectively represent and defend Lancaster Conference in meetings with the wider church. Then after returning home, he would present the merits of the wider church and its agencies to Lancaster conference.

After many years without contact, he and I met again in 1993, when David served on the search committee for the next Eastern Mennonite Missions president. As Richard and I agonized about whether to accept the call to serve in this role, we spent a weekend of discernment with friends from Lancaster and Conservative Mennonite Conferences. (Richard was serving as president of Rosedale Bible Institute in Irwin, Ohio, at the time.)

That weekend, I particularly remember David’s heart for the lost, for missions.

“We need someone who can call us back to a strong missions focus.” he said. “Our people have many interests and distractions. It’s not like it used to be when we were all united behind missions.”

God used David’s words to confirm what we had been sensing in our spirits.

Months before he died July 11, 2000, at the age of 81, I phoned him to ask a question about EMM history for a Missionary Messenger article. In his last words to me, he said, “Jewel, the Lord only knows how much missions has changed our conference.”

As moderator of Lancaster Conference from 1963 to 1983, David led with grace and truth, as baby boomers went off to Voluntary Service and college, and as they challenged and changed longstanding church expectations and understandings. Television came. Plain clothing went. And the church continued to grow, at home and overseas.

Many in my generation say they don’t want the bishops telling them what to do. But I feel like I need a shepherd to show the way. I’m glad he was there to hear my adolescent grievances and help me see beyond my tears. I’m glad he understood the changes, costs and difficulties in being an outward-focused, missions-centered conference – but urged us to go there anyway.

I grieve his passing. He represents an era of strong Mennonite leaders who were trusted and empowered to lead unapologetically. His leadership blessed both the home community and a world that doesn’t yet know the true Shepherd.