GOSHEN, Ind. — Ronald Stutzman, professor of anthropology at Goshen College, died Oct. 17 of complications with cancer, just days after teaching his last class. he was 61. 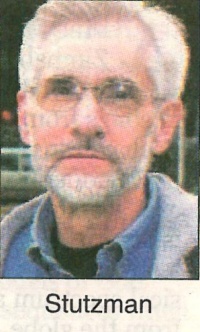 Stutzman taught at Goshen for 23 years. he chaired the department of sociology, social work and anthropology and coordinated the intercultural studies program.

He was diagnosed with cancer in early July. Despite the rapid advancement of his illness, he was determined to continue teaching for as long as possible. He spent several hours in his office on campus two days before he died in the care of his family.

Academic dean Anita Stalter said that despite the treatment he was receiving early in the fall, Stutzman wanted to continue teaching. He used a microphone so that his voice would project for his students.

"The spirit with which Ron taught clearly demonstrated his love for his field and vocation, and for Goshen College and his students," Stalter said. "It seems that teaching energized him and, importantly, continued to connect him to the community which cars so much for him and his family."

Stutzman received a bachelor's degree in psychology from Indiana University and earned master's and doctoral degrees from Washington University in St. Louis. He dedicated significant professional research to issues in latin and South America — as a development consultant to World Vision and studying interethnic relations in Ecuador's Andean highlands.

In May, Stutzman led a group of 12 Goshen College students to Colombia for a monthlong class, Doing Theology Abroad. The course examined issues of peace and justice in the context of the political and military struggles in Columbia.

"Ron was a person with deep convictions about the church, his community and the world," said Tom Meyers, director of international education and a former professor of sociology who worked in an office next to Stutzman's for nearly two decades.

"He was committed to the path of peace and considered his teaching to be part of the ministry of the larger Mennonite church. his fervent desire as that his students would make a difference in the world."

President Shirley H. Showalter said: "One of the lasting legacies Ron leaves behind is the student-led worship collaboration between College Mennonite Church and Goshen College called Morning Song, which he joined with others at the church and on campus to start."

The bells in the Union Building tolled at 3:50 p.m. Oct. 17 in memory of Stutzman. Students, faculty and staff then gathered around the campus peace pole, located outside the Union, in reflection and prayer.