HARRISONBURG, Va. — Albert N. Keim, professor emeritus of history at Eastern Mennonite University, died June 27 at university of Virginia Medical Center. He was 72. He had a successful liver transplant in 2007, but his health had declined in recent months. 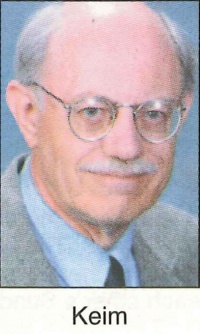 Keim joined the EMU history department faculty in 1965 and retired in 2000. He was appointed vice president for academic affairs-dean i 1977 and served in that role seven years.

"Al Keim introduced his students to historical and political issues by having them read books which motivated them to think analytically," said Gerald R. Brunk, professor emeritus of history.

"As Academic dean Al both envisioned and brought to reality the Global Village curriculum, which has given many students life-changing experiences in other cultures."

The Hartville, Ohio, naive grew up in an Amish home and attended Amish schools. He served with Mennonite Central Committee's Pax program in West Germany in the mid-1950s.

In 1972, Keim received a grant from the National Endowment for the Humanities to study the 20th-century Christian socialism movement — particularly the Fellowship of Socialist Christians, an organization created in 1930 by theologians Reinhold Niebuhr and Paul Tillich.

The next year, Keim received a grant to edit a volume of essays dealing with the Amish and compulsory education, based in part on the U.S. Supreme Court's ruling that compulsory school attendance for Amish children beyond the eight grade is an "unequal restraint" on their religious freedom.

His book, Compulsory Education and the Amish: The Right Not to Be Modern, was published in 1975 by Beacon Press.

He also wrote The Politics of Conscience: the Historic Peace Churches and War, 1917-1955 (Herald Press, 1988) and The CPS Story (Good Books, 1990), a history of alternate service programs during World War II.

Steve C. Shenk of Harrisonburg had Keim as a professor at EMU.

"He was a founding board member and tireless volunteer," Shenk said.

Keim wrote a series of reflective articles during 2000-01 for the Harrisonburg Daily News-Record while he and Fisher lived in Riyadh, Saudi Arabia.