MOUNDRIDGE, Kan. — While serving with Mennonite Central Committee in Germany in the 1950s, Erwin C. Goering visited renowned doctor Albert Schweitzer at his home in France and was impressed with his compassion.

Goering's life also was characterized by a compassionate commitment to meeting the needs of others. He died July 4 at Newton Medical Center at the age of 81. 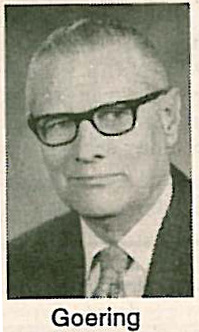 "I remember him as a very open person whom one got very close to," said Albert Gaeddert of North Newton, who preceded Goering as a director of Civilian Public Service in World War II. "He was very good at meeting people and making friends."

During World War II, Goering served first as a regional director and then general director of MCC personnel in CPS. A decade later he served another term with MCC, coordinating postwar reconstruction camps in Germany from 1957 to 1959.

From 1960 to 1962 he was executive secretary of the General Conference Mennonite Church.

Between 1946 and 1966 Goering served 14 years at Bethel College in North Newton in assignments related to fund raising and institutional development.

After leaving Bethel, he was vice president for development at Bloomington (Ill.) Mennonite Hospital for five years. Later he was president of Settlement Institutions of Appalachia in Knoxville, Tenn., and director of development for Freeman (S. D.) Junior College and Academy.

Moving back to Kansas, he worked in semiretirement with Kidron Bethel Inc. of North Newton, Memorial Home of Moundridge, Offender/Victim Ministries in Newton and Cross Wind Conference Center in Hesston.

He was a longtime member of the board of directors of Herald Publishing Co., publisher of Mennonite Weekly Review.

Goering had a master's degree in religious education from Mennonite Biblical Seminary.

A native of Moundridge and a farmer at heart, he enjoyed seeing one last Kansas wheat harvest before he died.

Erwin C. Goering was born in McPherson County, Kan., Sept. 13, 1913, the son of Christian B. and Adina Goering. He graduated from Bethel College in 1940 and from Mennonite Biblical Seminary in 1950 with a master's degree in religious education. He was baptized at Eden Mennonite Church, Moundridge, in 1929. He married Verna Mae Kaufman on Aug. 23, 1940.

He and Verna served in Civilian Public Service camps during World War II, he as camp director and she as matron. He became a regional director and then general director of Mennonite Central Committee personnel in CPS. They later served two years with MCC in Europe, where Erwin coordinated postwar reconstruction camps.

Between 1946 and 1966 Erwin served 14 years at Bethel College in fund raising and development. From 1960 to 1963 he was executive secretary of the General Conference Mennonite Church. He maintained throughout his life a deep interest in the conference, serving on numerous boards and committees.

After leaving Bethel in 1966 he was vice president for development at Bloomington (Ill.) Mennonite Hospital. Later he was president of Settlement Institutions of Appalachia in Knoxville, Tenn., and director of development for Freeman (S. D.) Junior College and Academy. Moving back to North Newton, he worked with Kidron Bethel Inc., Memorial Home of Moundridge, Offender/Victim Ministries and Cross Wind Conference Center in Hesston. His service on the Herald Publishing Co. board was especially significant to him.

Erwin was friendly with the soil. His farm roots were evident in his love of gardening and his concern for how things were going on his land. He was outgoing, with an avid interest in people from all walks of life. He also had deep concern for peace and social justice.

Erwin died July 4, 1995. He is survived by his wife, Verna; two daughters, Mary Jo Preheim and husband Doyle of Goshen, Ind., and LaDeen Frey and husband Rodney of North Newton; and three grandchildren.