Eshleman, who served over a span of nearly 50 years in Africa alongside his wife, Lois, died Jan. 18 at age 88.

"We were constantly impressed by his capacity to love, and by his kindness," said Don Jacobs, a fellow missionary with Eastern Mennonite Missions in Tanzania.

Jacobs spoke from Titus 3:4-7, a text Eshleman selected before his death. Eshleman was, as his daughter Charlotte noted at the memorial service, someone who always planned ahead and was an inveterate list maker.

Jacobs said that although Eshleman was known for his training or urologic surgeons in seven African countries and "did more good deeds in a day than the rest of us do in a month," Eshleman knew he was saved not by his good works but by the work that Jesus did on the cross. 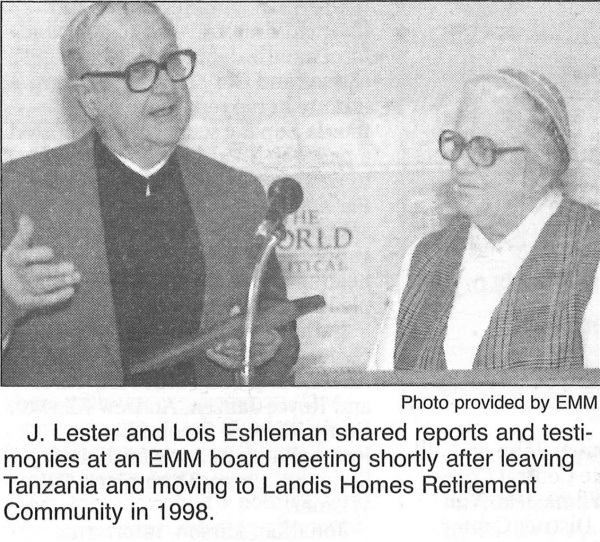 "He became a happy servant of the Love that appeared to him," Jacobs said. "He had binocular vision. With one eye he probed the body, with the other, the soul."

Jacobs still remembers the encouragement of Eshleman's prayers for him in 1944 when he was a struggling senior at Eastern Mennonite High School.

"I was warmed by this man's love as the Spirit of God invaded my life," he said.

Lester and Lois Eshleman first went to Tanzania in 1951, serving as a doctor and nurse anesthetist, respectively, at Shirati hospital until 1966. When they returned to Pennsylvania, Lester completed a residency in urology at the University of Pennsylvania. During this time he also co-pastored at Parkesburg Mennonite Church and preached in numerous Mennonite churches.

Kien Alfred Mteta, head of urology at Kilimanjaro Christian Medical Center in Moshi, Tanzania, traveled to the memorial service, representing the dozens of surgeons Eshleman helped to train during his 20 years at KCMC.

"He served the sick and underprivileged and is highly respected all over East Africa." Mteta said.

In 1998 Eshleman received the St. Paul Medal from the British Association of Urologic Surgeons — awarded to surgeons for outstanding contributions in developing countries.

While in Moshi, Lester and Lois Eshleman helped start Newlands Mennonite Church and Primary School for more than 200 children of all faith backgrounds.

For the last 12 years at Landis Homes, Eshleman served as a part-time pastor and board member. The Eshlemans made weekly rounds among the sick and shut-in.

Richard Showalter, president of EMM, honored Eshleman as one of the early mission pioneers who established the church where it had not existed before. Today the 70,000-member Tanzania Mennonite Church, as well as the current EMM team, stands on foundations laid by Eshleman and others with him.