Eby was a former MWR columnist

HARRISONBURG, Va. — Mary Emma showalter Eby, author of the best-selling Mennonite Community Cookbook, a columnist for Mennonite Weekly Review and longtime head of the home economics department at Eastern Mennonite University, died May 3. She was 90.

Eby founded the home econmics department at EMU, where she taught from 1946 until her retirement in 1972.

Her Mennonite Community Cookbook, published by Herald Press in 1950, has 450,000 copies in print and continues to sell about 5,000 a year.

"She's the mother of the Mennonite and Amish cookbooks, which have had just a phenomenal success on the commercial market," said Levi Miller of Scottdale, Pa., director of Herald Press. "It was really all begun with her work on that cookbook." 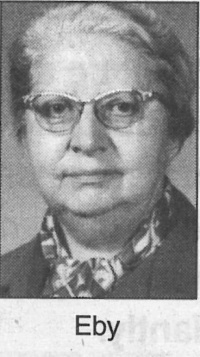 In MWR, her twice-monthly column, "Homemaker's Corner," ran seven and a half years, from 1973 to 1981. It focused on the blessings of everyday living, along with recipes and household advice.

Eby served for four years with Mennonite Central Committee before beginning her teaching career. During that time, she was loaned to United Nations Relief and Rehabilitation Association to work as a nutritionist in refugee camps in the Sinai Desert of Egypt. Later, she served as hostess and cook at MCC European headquarters in London.

A 1942 graduate of James Madison University, she received a master of science degree in general home economics at the University of Tennessee in 1948 and a doctor of home economics education degree at Pennsylvania State University.

She was a lifetime member of Trissels Mennonite Church near Broadway.

Two brothers, Jacob and Owen, preceded her in death.

A memorial service was held May 11 at Trissels Mennonite Church.