Dr. Bauman died Sunday night, oct. 4, at his home in Coopersburg after suffering a heart attack, it was learned here.

A native of Eastern Pennsylvania, Dr. Bauman was a graduate of Bluffton College and of Jefferson Medical College in Philadelphia. He and his wife, Ella, also a medical doctor, went to the India field as missionaries in 1925 where they founded the Christian Hospital at Champa. They retired from overseas service in 1960.

Surviving in addition to the widow are five children: Kenneth, principal of the Union Biblical Seminary, Yeotmal, India; Dr. Betty Shelly, with her husband Dr. Walter Shelly a missionary in the Congo; Clara Ann, wife of Dr. Stanley Stauffer of Emmaus, Pa.; and Mrs. Robert (Harvella) Stutzman of Normal, Ill.

Harvey grew up in a home where God was real. As a boy he achieved as an award for his corn project a trip to Washington where he met President Woodrow Wilson.

Graduating from Quakertown High School in 1914, he pursued further studies at Perkiomen Seminary before going to Bluffton College where he graduated in 1919. At Bluffton he was active in athletics, the literary club and the Student Volunteers, through which he was challenged to the needs of the world.

The 1918 college book so well puts in words what many today would say: “Harvey is one of those rare kind of human beings, seldom heard but (often) seen. Harvey believes that the finest of all arts is the art of living, and the highest of the sciences is the science of conduct. He has the college man’s three graces — sense, sincerity and simplicity. One who can use his cool head, good sense and warm heart to a decided advantage for himself and mankind.”

From Bluffton he went to Jefferson Medical College in Philadelphia. While attending medical school he participated in the life of the city and various Eastern District congregations. completing his medical studies in 1922, he interned in the Allentown General Hospital the following year.

“No man is an island, no man stands alone” was so true of Dr. Bauman. In 1924 he married Ella Garber and together they gave themselves to help physically and spiritually, the people of the Central Provinces in India. For over 35 years Dr. Bauman worked on the Indian plains where he built and administered the Christian Hospital at Champa.

This was no ordinary medical work which he performed, for he not only had to build buildings, but also train a staff of workers. He participated in the total Indian Christian church’s endeavors, serving on the boards of hospitals, schools and churches. He served as pastor of the Champa church, at times, while being medical superintendent at the Bethesda Leper Home and the Christian Hospital.

There was time for the family. Every morning and evening, while the family was together, Scripture was read and prayers offered. He was strict and yet liberal and understanding in letting each child choose for himself what to do with is life. It was not taken for granted that his children become “medical” or that they become “missionaries” and, perhaps, that is why they are both. Uppermost in his discipline was “be observing of the needs of others and do what you can about it.”

In 1961 he returned from the Indian work and after itinerating among the Mennonite churches he and his wife were named in 1963 as joint director of the cancer detection department of Allentown General Hospital. In his retirement he continued to fill pulpits and was concerned in the activities of the church. He was a member of the West Swamp Mennonite Church, Quakertown. 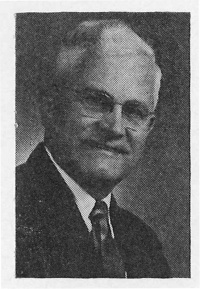 Harvey R. Bauman, M.D., West Swamp Church, Quakertown, Pa., was born Feb. 26, 1897, and died Oct. 4. A graduate of Jefferson Medical College, he along with his wife, also a physician, was a medical missionary in Champa, India, for the General Conference Mennonite Church from 1926 to 1961. He was the father of five children, two of whom are currently in missionary service for the General Conference: Kenneth, principal, Union biblical Seminary, Yetomal [sic Yeotmal], India; Dr. Betty Shelly, Kimpese, Congo.